Top Music Charts – Got to check them all! 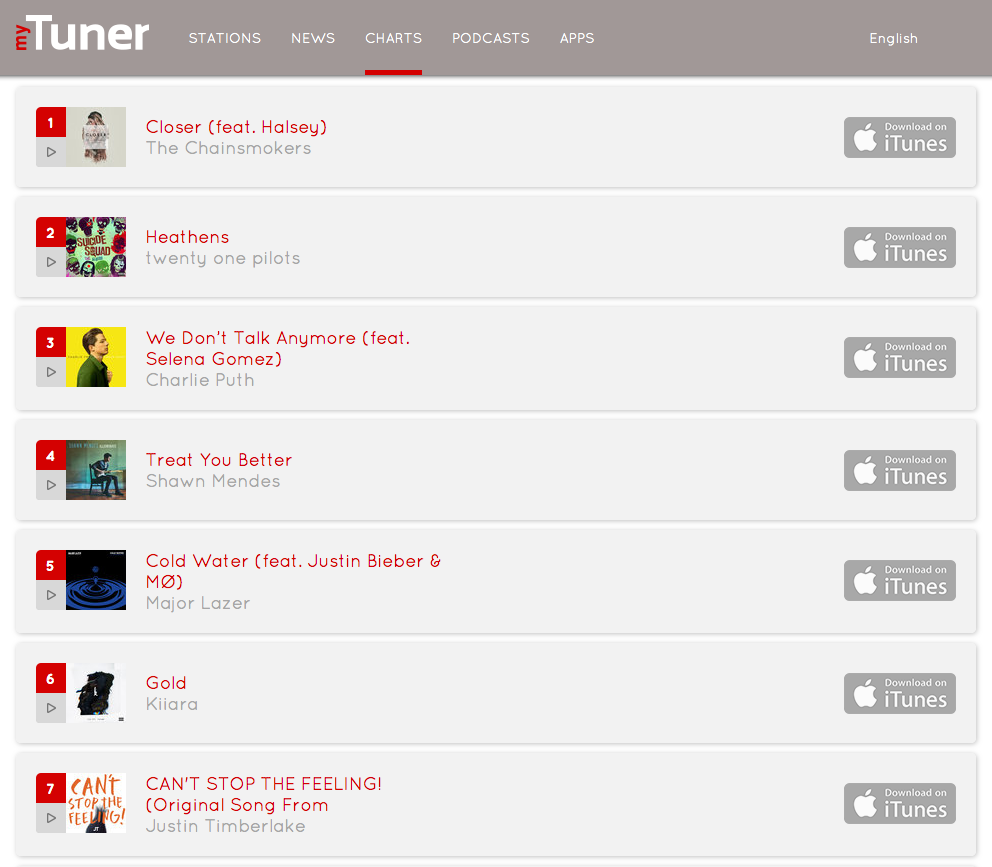 Do Top Music Charts make your day by making it easier for you to listen to brand new songs or to your favorite hits of the moment?  We know it does! If it doesn’t, well just try opening our website or app and you’ll see how easy it is to check the Top Music Charts of the day. myTuner Radio brings you the Top Music Charts and you can filter them by country (150 countries), genre (15 available), local artist, most played on the radio, today’s top 10, new songs on top 100 and 2015’s Top 40.

USA’s Top 10 last month had artists and songs such as The Chainsmokers with Closer (feat. Halsey), Justin Timberlake with Can’t stop the feeling, Major Lazor with Cold Water (feat. Justin Bieber & MØ) and Kenny Chesney with Setting the World on Fire (with P!nk). You can also check the Top Music Charts on the app (available for iOS, Android, Mac and Windows), which means that you can take the Top Music Charts with you everywhere you go and check the top music charts on 150 different countries.

The Top Music Charts also shows you the most played songs on the radio last month by our US users. The Top 5 were Nicki Minaj & Rihana, Work (feat. Drake), Jeremih with Oui, Justin Bieber with Sorry, Chris Brown with Back to Sleep and twenty one Pilots with Stressed Out. The most played on the radio Top Music Charts content is based on the 30,000 radio stations that exist on myTuner’s database and its usage by US users.

Apart from these, you can also check the Top Music Charts and the New songs on Top 100. Last month’s top 5 US ones were Young Greatness by Moolah, One Dance (feat. Wizkid & Kyla) by Drake, You Should be Here by Cole Swindell, LA Confidential by Tory Lanez and Low Life (feat. The Weeknd) by Future. When it comes to the Top 40 Local artists on myTuner’s Top Music Charts last month, the most popular US artists were Jeremih, Chris Brown, Bryson Tiller, Desiigner, J. Cole,Tory Lanez, among others.

If you are in a nostalgic mood why not also check 2015’s Top 40 of myTuner’s Top Music Charts. If we do not filter this top by any country it considers its 15 million users from all over the world and gives us worldwide results, with names like Gigi Finizio with Attualità, Taylor Swift with Wildest Dreams, The Weeknd with Can’t Feel my Face, How Deep is Your Love by Calvin Harris, Sport by Geraldo Pulli, among many others that you can check in here, in the Top Music Charts.

The Top Music Charts also allows you to listen to a preview of each song (on the platform and on the iOS app) and it redirects you to the store to buy it. It’s literally a world of Top Music Charts for you to discover, day-by-day, country-by-country with myTuner Radio.