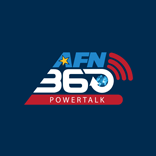 AFN 360 PowerTalk gives you three full hours of Rush Limbaugh, Stephanie Miller, Sean Hannity, and Thom Hartmann each weekday, plus a weekend lineup never before seen nor heard in political talk radio. It's the most complete list of shows from liberal to conservative and everything in between all on one channel. AFN PowerTalk, the only channel on earth where you can find all the political talk heavy weights. Where left and right collide...AFN PowerTalk!